Teenagers are known for the immense stress and pressure placed on them with no way to escape--leading a large majority to depend on drugs as a way to cope. With a society that promotes pro-legalization of marijuana use, a drug that relaxes brain stimuli, teens are left confuse… is the drug safe or not? 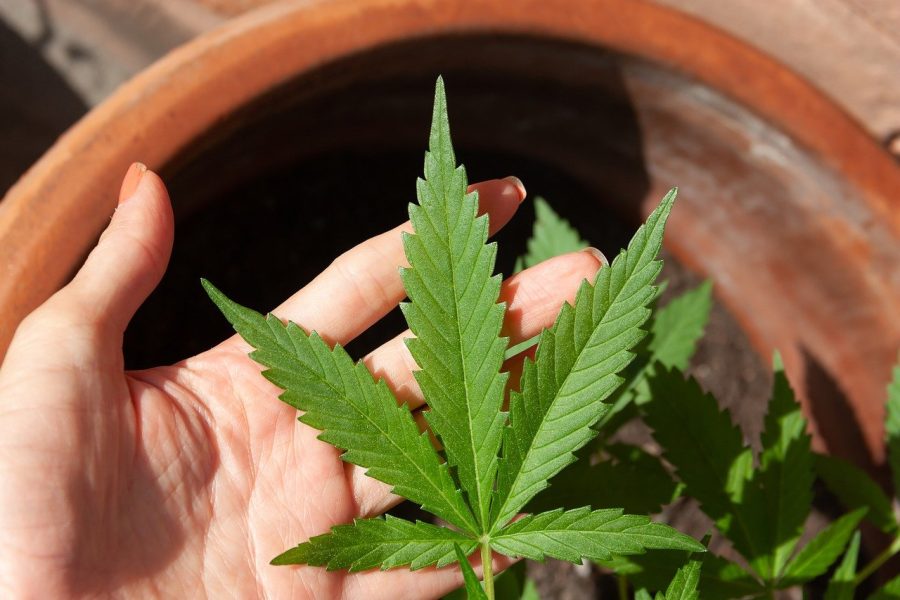 A single leaf from a marijuana plant that is used to create weed-products.

*Content Warning: The following article contains statistics and language revolving around the illegal act of non-medical marijuana use by minors.*

“Many teens are looking [for] an escape from everyday problems. As a result, they may turn to marijuana to help deal with painful emotions and cope with mental illness.” – Doctor Raychelle Lohmann

In the almost 10 year span since the first U.S. states legalized marijuana for recreational use (for adults 21 and older) there has been over a 400% increase in marijuana use in teens, as seen through the statistics from the National Institute on Drug Abuse. Marijuana is a drug that is referred to by many names, but the most well known being weed, cannabis, and pot. It is an easily accessible, low risk way for minors and adults alike to treat medical ailments, mental illness, to reduce stress, or simply to reduce boredom. Marijuana is commonly referred to as a “gateway drug,” where the impact of use is not as severe as other types of drugs, which allows for teens to easily experiment-and develop a reliance on-marijuana.

What do we know?

Recreational marijuana use is legal in 18 U.S. states: the District of Columbia, the Northern Mariana Islands and Guam, with medical marijuana currently being legal in 36 states: the District of Columbia, Guam, Puerto Rico, and the Virgin Islands. In all 21 of the states and territories that legalized recreational marijuana, all 21 require a minimum age of 21 to possess or use marijuana. According to a 2019 survey by the National Survey of Drug and Health, in a given four week period, 1 in 6 minors aged 12-17 would engage in any sort of marijuana use. This equates to over 4 million students in their age bracket engaging in marijuana use in one month.

Why is marijuana so commonly used?

According to the American Addiction Center, teens use marijuana for a variety of reasons; the most prominent being the curiosity teens have with the drug, peer pressure, boredom, coping with mental or physical ailments, or just to feel good. An inside source revealed that out of 27 Grant students, roughly 60% of the students used marijuana just to feel good, and 33% used the drug to cope with mental or physical conditions. The remaining 7% used marijuana due to curiosity or boredom–with none of the 27 GCHS students interviewed explaining their drug use on any sort of peer pressure from students. Our source believes that marijuana “allows [students] to be more calm and focused in everyday life,” which is why it is so necessary to sustain daily responsibilities for some students.

A common method for using marijuana is to roll the marijuana into a joint using cigarette papers and smoke the formed cigarette. Blunts are similar to joints, where the marijuana is smoked to reveal the effects of the marijuana through a hollowed cigar that has replaced the cigar with marijuana, or a mix of the two. Marijuana can also be smoked through bongs, bubblers, and pipes. Some marijuana users use homemade devices to create bongs and gravity bongs using old milk jugs, soda cans, buckets, or plastic bottles. Inhaling marijuana through vaporization is a newer and more popular form of marijuana consumption, due to a recorded better high when using vapes, a weaker marijuana smell, and the vapes are easier to conceal. Although similar to vaping, dabbing uses tetrahydrocannabinol (THC) oil to create a stronger high for the user. Oral ingestion is also used to obtain a high, where marijuana oil is cooked or baked into a variety of foods, but “weed brownies” are a popular choice. Some marijuana users have sprays to spray on the users tongue. Marijuana tinctures are also placed under the tongue, made of liquids that are extracted from the marijuana plant itself. Topical methods use thick oils to be placed on the skin to relax and relieve muscle tension and are exclusively used for medicinal purposes, but do contain THC. Cannabidiol (CBD) is a part of the marijuana plant that does not produce a high, and is therefore as of now legal for all ages to use and purchase.

What are the legal consequences?

Although marijuana is legal in almost half of the United States, it is not legal for those under the age of 21. Possession of marijuana less than 10 grams is no longer a criminal offense, it is now treated as a civil law violation. This type of violation often results in a $100-$200 fine. More than 10 grams but less than 30 grams of marijuana possession results in a Class B misdemeanor, punishable by up to six months incarceration and a $1,500 fine. As the amount of marijuana increases, fines and incarceration times dramatically increase as well. Additionally, the use of a Fake ID to purchase marijuana by minors can result in the suspension of their license, along with the fines and punishment decided in court. But the illegal sale of marijuana has more extensive punishments, with up to 2.5 grams resulting in a Class B misdemeanor and a fine of $1,500 and up to six months in prison. The punishments for the sale or delivery of marijuana is more extensive than the use of marijuana. This is especially important for minors to know because the National Institute of Drug Abuse reported that around 60% of 10th graders report that it would be “very easy” to “quite easy” for them to purchase marijuana in any form.

What are the physical and mental consequences?

Aside from the legal punishments, marijuana has an effect on all aspects of a user’s life. For students, marijuana use before the brain is fully developed can cause structural damage to the brain’s hippocampus. Marijuana use is also linked to structural change in the brain’s reward system and are more likely to use not only marijuana but other drugs when given the chance. Additionally, the Center of Disease Control and the National Institute on Drug Abuse recognizes that adolescent marijuana users are also statistically more likely to drop out of high school and get lower grades than those who do not use. Marijuana also leads to an increased risk of mental health issues, most predominantly anxiety and depression in teens. Even those who use marijuana as a short-term fix for their mental health battles find that the end result is worse than when started. 1 in 6 teen marijuana users also become addicted to the drug, which is contrary to popular belief that marijuana users cannot become addicted. Those who drive high are at a heightened risk of accidents due to the impaired ability to maintain safety regulations and reaction time. But marijuana use does not only affect the users, it also affects those around them. The smoke derived from marijuana is also a carcinogenic, or a cancer-causing substance, for the user and those around them. This can negatively affect the respiratory system of those around them, including family and friends who do not use marijuana. The smoke of marijuana is also a pollutant to the air and is roughly equated to the air pollution concentration caused by extreme wildfires and severe industrial pollution.

What alternatives are there to marijuana?

Medicinal marijuana is prescribed by doctors to aid the patient and should not be changed or altered without consulting a doctor. For the majority of minors, marijuana is used simply to have fun and relax. An alternative is to find activities that you enjoy and surround yourself with people that not only make you happy but encourage you to make healthy choices. For those who use marijuana to cope with mental or physical ailments, it is always important to communicate your concerns to your doctor, therapist, or guardian, and to find another route towards a healthy life. Marijuana use in any form is dangerous for your wellbeing, and those around you, and can also result in further difficulties in life.