How Long Will the Cries for Justice Fall on Deaf Ears in Mexico?

“Ten women and girls are killed every day in Mexico” - Amnesty report 2020.

Mexican protestors hold up signs that address violence against women, "I don't dress to provoke you baby, not everything revolves around your penis."

On March 8, tens of thousands of protesters took to Mexico Cities’ streets in protest of the growing number of Femicides that increase each year and are not investigated. The protesters wear purple to signify justice and dignity. 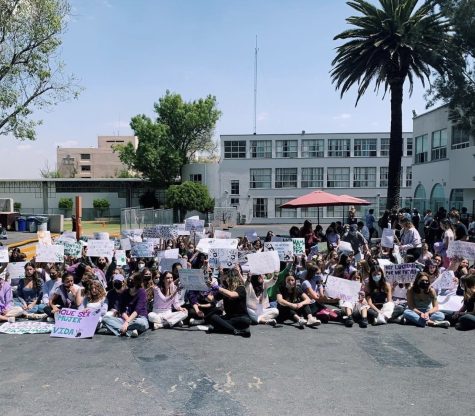 The tens of thousands of protesters that march through the streets of Mexico City are trying to bring awareness to the world and the Mexican government for change but get overlooked by the lack of worldwide media coverage because of the restraint the President wants to show a 75% budget cut for the federal women’s institute was placed last year and the president refuses to comment on the budget cut.

Mexico has a bad reputation for kidnapping tourists and Americans in the 90s that present-day makes people think Mexico is still dangerous. The president repeatedly downplays every mention of the Femicides and would like the rest of the world to think of the Femicides. By Mexico not covering the protest and keeping it off the news the rest of the world doesn’t seem to notice when thousands of women are killed each year in Mexico.

On the Corruption Perceptions Index 2020, Mexico is ranked in the 30-40%, where 0% is highly corrupt and 100% is clean. Mexico compared to other countries such as the US and Canada places in the 90-80 percent and Sweden which places in the 100th percentile. “Since 2015 Femicides have gone up 145%”- Los Angeles Times

16-year-old Mexican woman recalls the trauma of what happened to her mother, in 1998 when a middle-aged woman was walking from the train in the middle of the day and was taken by 2 grown men and led into an abandoned building and assaulted and killed and wasn’t found until 4 days later. When found her case was filed but wasn’t investigated despite the family’s constant reports and complaints. These cases happen too often in Mexico, “93% of Femicides were not reported or not solved in 2019”- New York Times.

Even though this protest has been evident since the 1990s the protesters have yet to see justice due to the lack of media coverage and governmental resistance. Mexican police close down major roads, monuments, and cities, as they claim safety for their citizens what they seem to miss, is the safety of their female citizens, “77% of women feel unsafe in Mexico” ( The Guardian ).