Shooting Down the Star 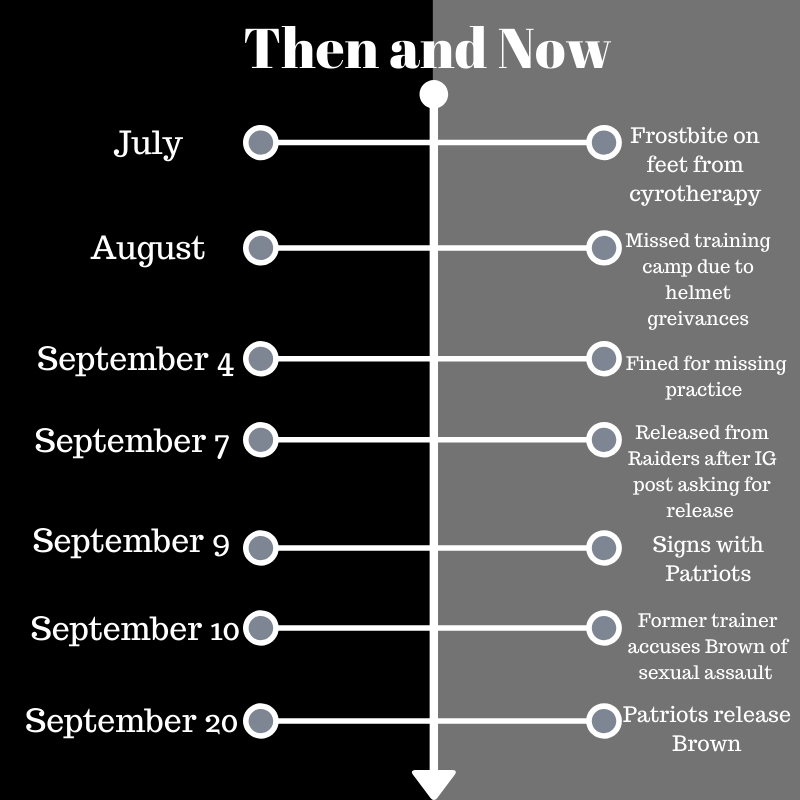 Saying Antonio Brown’s last few months have been horrific would be an understatement. A man who was considered the best wide receiver in the NFL is now watching the 2019-2020 season from his couch like the rest of us. A man who led the league in receiving touchdowns in 2018, with 15 is now out of the league. A man who was signed a $50.1 million dollar contract with the Oakland Raiders, is now filing a grievance to get $40 million back.
The past 6 months for Antonio Brown could have been scripted for a movie. The problems started for the former wide receiver back with the Pittsburgh Steelers. Brown was drafted in 2010, and spent 9 years with the Steelers. From 2011-2016 Brown delivered an eye-popping 8,210 receiving yards and 50 touchdowns,which landed him a hefty $68 million dollar deal for 4 years in 2017. The next year after his newly signed deal, Brown would go on to add another 1,533 receiving yards and nine touchdowns to his resume in 2017, but the honeymoon between Antonio Brown and the Steelers would soon start to come to an end.
The cracks started to form late January back in 2017 when the Pittsburgh Steelers beat the Kansas City Chiefs in a nailbiter, 18-16 in the AFC Divisional Round. The story wasn’t the Steelers beating the Chiefs it was what happened after the game that created headlines. Brown pulled out his phone and live-streamed the locker room celebration on Facebook which was a violation of league policy. This was also done in spite of quarterback Ben Roethlisberger asking Brown to lay low a bit on social media, and his decision to do the opposite shone a light on head coach Mike Tomlin yelling at least one sharp expletive around about the next opponent to come to be the New England Patriots in the AFC Conference Championship Brown then which issued a formal apology via press conference.
Just one week later, the Steelers took action. Brown was reportedly fined $10,000 by the team for streaming Pittsburgh’s locker room celebration. Mike Tomlin who was the Head Coach of the Steelers, informed his players during a team meeting this week that he was fining Brown. Tomlin disciplined Brown, but the matter was made worse when it was discovered that Facebook had paid Brown $244,000 at the start of the 2017 season to create content for them. And so, his fall in Pittsburgh began.
Fast-forwarding 2 years later Brown took to his beloved social media accounts to both thank the Steelers’ fandom and proclaimed it was time to “move on”. It’s a decision the organization itself agreed with, but still had enough motivation to attempt a repair in the relationship. After all, Brown was still under contract for three more years and coming off of a 1,297-yard season. The damage was already done and the organization finally agreed that it was time to move on. After Antonio Brown and others questioned his commitment to football he was traded to the Oakland Raiders for a 3rd and a 5th round pick.
The Oakland Raiders knew trading for Brown meant they had to restructure his contract and added more money to his contract. Shortly after being trade, Oakland and Brown agreed to a contract that would pay him just over $50 million,for the next 3 seasons. The deal also included $30.13 million in guaranteed money. With OTAs starting the franchise couldn’t wait to see their new star wide receiver out there. But Brown wasn’t as ready as the team was. The reason he wasn’t ready…his helmet. He was so irritated with the NFL’s new policy that wouldn’t allow him to wear his long time helmet due to the helmet not meeting the policy’s new standards. This forced Brown to wear a helmet that he showed displeasure to his OTA coaches. Brown reportedly stormed out of practice attempting to sneak his old helmet onto the field. As OTAs came to an end the team felt that this helmet issue would soon be past them but that was far from the truth.
Late July and early August Brown was placed on the non-football injury list, with undisclosed injury at the start of training camp. The truth would soon come out about Browns’ injury and it was due to the bottom of his feet having severe frostbite due to a cryotherapy machine wearing improper footwear. With conflicting reports now swirling about that claim he’s ghosted the Raiders and their attempts to communicate with him, with a different report claiming there have been discussions and he’s expected to return “soon”. He took to Instagram to post an image of the soles of his feet, revealing just how bad they looked.It didn’t actually matter how bad his feet were because Brown was threatening to never play again if he couldn’t wear his old helmet.
As the regular season approached, Antonio finally found a helmet that he could work with. After all these problems the team thought these issues were over and it was time for some football. Again they were sadly wrong, reports came out that Brown “got into it” with the General Manager of the Raiders Mike Mayock, in a disagreement that could lead to the team suspending the All-Pro wideout for conduct detrimental to the team. With $30 million in guaranteed money Browns’ time with the Raiders was looking to come to an end. 24 hours later after the rumored suspension. The Raiders head coach Jon Gruden still confirmed Brown would play week 1 against the Denver Broncos after Brown gave an apology.

The dust finally settled, but not even twenty-four hours later Antonio Brown posted a nearly two-minute video to his YouTube feed that appeared to feature a private phone call with Gruden where the Raiders coach appears to tell the receiver to “Please stop this (explicit) and just play football,” and other things. Saturday the team fined Brown more than $200,000 and voided $29.125 million of his guarantees. Later that same day the team released Brown.Just after 5pm Brown announced on Instagram that he signed with the New England Patriots.
The Brown saga took a darker turn when a lawsuit was filed in the Southern District of Florida by physical trainer Britney Taylor who claimed that Brown sexually assaulted her on multiple occasions over the last three years. Since the lawsuit was filed, Brown has released his own statement via his lawyer, denying “each and every allegation in the lawsuit.” The Patriots also released a statement, saying that the team “takes these allegations very seriously”. The NFL then conducted their own investigation into the case. Despite the ongoing investigation, Brown made his debut with the Patriots,week two against the Miami Dolphins where Brown caught his first touchdown. Brown also had four receptions for fifty four yards. Just when you thought things were looking up for the star wideout, the Patriots decided to release the Pro Bowler due to the growing distraction and allegations against him.
Antonio Brown is a man without football now. A man who is watching football every Sunday from his couch like the rest of us. The only bright side into this saga, is that Brown has the opportunity to rewrite history about him. The man is 31 years old and is on the back side of his prime,but is still arguably the best wide receiver in football. Only Antonio Brown could accomplish that goal. For now that man is like the rest of us,watching football like a fan.